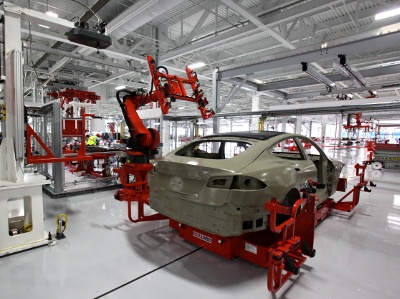 By connecting everyday objects through networks and enabling them to send and receive data, the Internet of Things - or IoT – is predicted to be a major driver for growth across multiple markets, including agriculture, automotive, healthcare, retail and leisure.

Original Equipment Manufacturers (OEMs) with their finger on the pulse stand to create new revenue streams through the development and manufacture of an expansive range of new and innovative products.

However, in order to compete in what are expected to be fiercely competitive markets, OEMs must ensure their manufacturing plants are "smart" enough to meet the future needs of the end user.

In this blog post we explore how the IoT and the manufacturing world are coming together to create what many are already labelling the next industrial revolution - Industrie 4.0.

The term Industrie 4.0 (also known as Industry 4.0) was initially used as a reference to one of ten "future projects" listed within the High-Tech Strategy 2020 Action Plan, which was passed by the German government back in March 2012.

Put simply, Industrie 4.0 is an initiative to revolutionise the manufacturing and engineering sector by combining the digital world and that of industrial production to create "smart" manufacturing facilities. Some of the expected benefits include resource productivity and efficiencies, along with greater flexibility in creating highly personalised or configured products on a mass scale.

To remain a forerunner in this technological race, the German government is reportedly investing around €200 million (£140 million) into research across academia, business and government and the rest of the world has also been taking note.

For example, in the US a Smart Manufacturing Leadership Coalition (SMLC) has been formed, consisting of manufacturers, suppliers, technology firms, government agencies, universities and laboratories - all with the common goal of advancing the way of thinking behind Industrie 4.0. Not to be outdone, General Electric have since coined the term "The Industrial Internet" as the way to define how big data analytics and the IoT will produce new opportunities for industry.

What is the difference between Industrie 4.0 and the IoT?

The concept of each is similar - i.e. connecting a variety of "things" together via networks so that they can talk and respond to one another proactively, without the need for human interaction. That said, there is a distinct difference so far as the IoT is largely focused on connecting everyday consumer objects together.

Many examples of possibilities exist - in a few years’ time your alarm clock could trigger your shower thermostat while the kettle and toaster prepare your breakfast – by which time your driverless car will have started remotely in order to get the temperature right based on its on-board weather app. Seem far-fetched? Maybe, but then again so did the thought of having working hover boards or driverless cars until Lexus and Google started making serious progress.

Industrie 4.0, however, is much more focused on the manufacturing process and combining the IoT philosophy with industry to help create smart factories and, ultimately, smart products. With a growing trend towards personalisation, the ability to manufacture complex configure-to-order products on a mass scale in a cost efficient way is just one of the benefits smart factories will set out to address. The concept is that a product will eventually be "born", its DNA encapsulated within a RFID tag or chip defining not only its unique specification but also the details relating to the end user and shipping location.

In addition it’s also expected that production equipment networked within such smart factories will be able to self-diagnose, and then repair, in advance of causing production down time. Imagine the efficiency benefits associated with a machine pre-ordering its own spare part in advance of the component failing.

What are Cyber-Physical Systems?

Cyber-Physical Systems (CPS) are enabling technologies that help bring together the virtual world of computers and networks with physical processes in order to create an environment which allows "intelligent" objects to talk and respond to one another. The IoT relies on having CPS available in the first place.

Is this the start of the next industrial revolution?

Arguably, yes. The use of CPS is widely reported by some German industry leaders as marking the beginning of the fourth industrial revolution – hence the term Industrie 4.0. While the use of electronics and IT has been widely used within manufacturing to automate production since the late 60s, the technological advancements associated with the CPS are considered significant enough to mark the next chapter.

This all sounds great but are there any drawbacks?

Possibly, yes. One of the most significant challenges faced is agreeing the "language" each machine uses to communicate and respond to one another. If, for example, the machine at the end of the production line responsible for quality control can’t read the specification encrypted during the assembly stage then things are going to grind to a halt pretty quickly. Understanding and agreeing the benefits associated with "Go", "Rust" or any other variations of programming languages in between is going to require a level of collaboration if we are to see CPS fully embraced.

As we have seen with Google recently, in terms of their internet search market share, concerns can also arise if one party begins to dominate. A handful of industry leaders are already believed to be well advanced in Industrie 4.0 and the fear therefore is that they could represent an unfair advantage should a common language, dictated by them, come into play.

And then there is the small issue of security. A very real threat of cyberattacks and terrorism already exist today with a number of high profiles cases exposing just how vulnerable our data and systems can be at times. In a truly integrated world where machines talk to one another and then take actions based on these decisions, working out how to protect them against external instructions will certainly be high up on most OEMs' agenda.

Hopefully this blog post has helped answer some of your initial questions, although it is by no means exhaustive due to the sheer size of the subject. Due to the rapid pace of change taking place within this exciting landscape we will continue to watch and report on how Industrie 4.0 and the IoT begins to revolutionise the manufacturing world as we know it today.