In this case study, we focus on an OEM that provides specialist material handling solutions. Their hardware platform is modular and scalable, which provides the end user with a great deal of flexibility.

As an example, the end user can install a relatively small hardware platform at their existing site to fulfil immediate requirements but then quickly expand on it as they grow. This approach has allowed the OEM to target a variety of potential customers; from small organisations through to well established global brands.

The OEM took the strategic decision to outsource the manufacturing of their hardware platform.

They did this so that they could focus on:

During our early discussions with the OEM, it emerged that their key requirements for potential EMS providers were size (both floor space and financial stability) and the capability to deliver complex electro-mechanical systems. Although the solution they offer is modular, the footprint for the smallest element is 3m long x 2.5m wide x 2.5m high, which clearly has the ability to consume large amounts of factory floor space at any given time. Before visiting our site, the OEM had already determined how much space an EMS provider would need to have, both at the beginning of the project and in the future, to support their predicted sales growth.

In addition, finding an EMS provider with manufacturing facilities and transportation links into Europe was of equal importance, to support their ambitious growth plans.

Although breaking into Europe was part of a phased plan, following increased growth within the UK, the OEM needed to demonstrate to prospective clients that they already had a robust supply chain in place to satisfy European demand. Partnering with an EMS provider that had both UK and European manufacturing facilities would allow them to service and grow their UK customer base, while providing confidence to European clients that an established route to market exists.

To satisfy the final stages of their growth plans - entering the US market - and to eliminate a degree of risk, the OEM requested that we create and send across detailed build and test documentation.

They wanted to guarantee that the build process and, therefore, quality would always mirror those units produced for the UK and Europe. This would be regardless of where the end user was based, or which assembly partner would be responsible for satisfying demand (in case they needed to partner with more than one EMS company going forward).

Unlike some other outsourcing projects, the OEM in this example was not focused on trying to agree on a unit price during our early discussions. They had a thorough understanding of the material costs and, except for some low value metalwork, had already negotiated supported pricing on all of the key cost elements. Instead, therefore, they asked for a material margin model and labour rates so that they could work out rough costings themselves. This approach allowed the OEM to get a “feel” for how competitive we were, without investing time and resources into a detailed request for quote (RFQ) process. Clearly, once a decision was made, the OEM would need accurate price and delivery information, but they decided not to spend time early on analysing pricing details until they were satisfied we could support their top level objectives.

During our early discussions with the OEM, it emerged that their key requirements for potential EMS providers were size (both floorspace and financial stability) and the capability to deliver complex electro-mechanical systems.

In addition, they also avoided walking around our UK manufacturing facility as they had already determined that any assembly or test work would need to be carried out in our European facility. Instead, they spent time talking to senior management about their logistics requirements and what steps we would take in the future to support their ambitious growth plans. It was clear the OEM had already carried out a huge amount of background research into our organisation and used their time on site to satisfy themselves that what was portrayed through our websites and service videos was, in fact, accurate.

One of the biggest challenges the OEM encountered during supplier selection was finding a partner that could consistently produce quality product, yet was large enough to support their growth objectives. While they had worked with a number of leading automation specialists in the past, many of which had been integral to the design and build of prototype hardware, they had struggled to find suppliers with the size, electro-mechanical capability and infrastructure they now required. This is what had led them to investigate outsourcing to an EMS company.

Outsourcing: A collection of EMS case studies from JJS Manufacturing

Outsourcing to an electronics manufacturing services (EMS) provider is an excellent way for an original equipment manufacturer (OEM) to free up more time to focus on designing, marketing and selling their products. 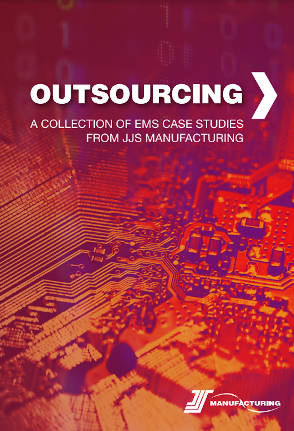