Which test is best for your PCBA assembly - ICT or Flying Probe? 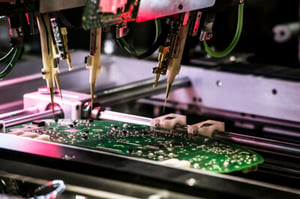 In-Circuit Test (ICT) and Flying Probe are two of the most popular types of Automated Test Equipment (ATE) used in electronic PCBA assembly.

But what sets them apart? And how can you decide on the test strategy that is going to work best for your assemblies?

In this blog post, we highlight the benefits (and the shortcomings) of both ICT and Flying Probe with a specific focus on three areas: product design, coverage and cost.

A good quality test programme (also known as good ‘coverage’) will rely on the quality of your Computer Aided Design (CAD) data and schematics.

The CAD data is used to generate the basic test programme, which ensures that information is sourced from the original design rather than any manual interpretation of other data.

Good quality populated, and unpopulated, sample PCBAs are also vital for fine-tuning the test programmes, ‘debugging’ and making any fixtures, so the assemblies physically fit as they were intended.

So thinking about product design for a moment, what are the differences between each test solution which you may want to keep in mind?

When we talk about 'coverage’ we're referring to how much of the circuit you are actually able to test.

Both ICT and Flying Probe carry out what is called a ‘manufacturing defects analysis’ or MDA, which allows for the majority of the most common process faults that are likely to occur.

These can include: open circuits (due to insufficient or faulty soldering), short circuits, passive component measurements (resistors and capacitors), diode and transistor orientation, and basic supply voltage measurements.

But, given that these elements are common to both types of testing platform, what sets them apart?

The programming cost will depend on the complexity of the assembly, but is broadly the same for either test solution, potentially around £2000 or so. When it comes to other charges associated with test, however, there are some key differences to bear in mind:

If you're still unsure about which test option is best for your product, you may find this simple visual checklist useful in comparing the pros and cons: 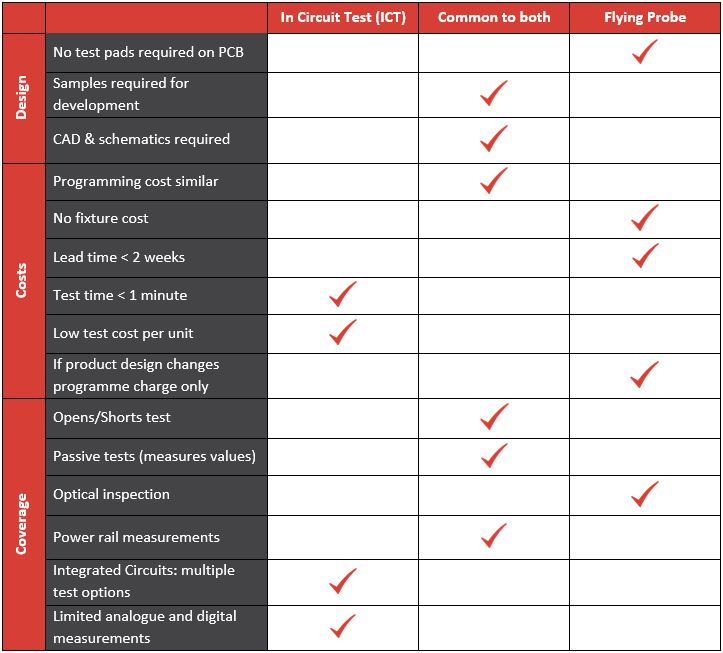 When it comes to test, each product will have its own unique requirements.

But by keeping in mind the primary benefits (and the points of difference) of the two platforms, you should feel much better placed to select the best test strategy for your PCBA assembly. 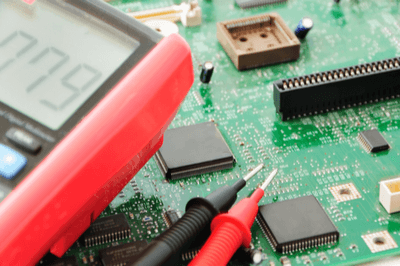 The 4 things every electronics manufacturer needs to know about test