How the conflict in Ukraine is affecting the global supply chain 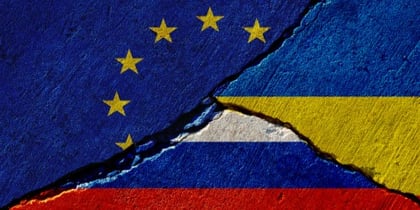 Early in 2022, after the Chinese New Year, there were cautious whispers that we might see supply chains normalised. But last Thursday was the beginning of the week that changed the world. Our thoughts are with the families on all sides who are affected by the Russo-Ukrainian war, and we hope that the parties can find a peaceful solution to the conflict before any more blood is spilt. The humanitarian tragedy is heartwrenching, but here we will focus on the logistical issues caused by the war.

Ukraine is known as the ‘breadbasket of Europe’, but manufacturing is also likely to take a hard hit. Many areas of global supply chains will be negatively affected by the conflict—some immediately, but most will only become apparent in the long term.

The global semiconductor chip shortage is old news, but the war in Ukraine might cause extra disruptions and affect supply—further constraining tech and car companies. Ukraine and Russia are vital sources of neon gas, which is an essential element to manufacture semiconductor chips as it is used in the lithography processes for chip production. It has been reported that the vast majority of the U.S. neon supply comes from Ukraine and Russia.

Neon gas is a byproduct of steel manufacturing in Russia, where up to half the world’s semiconductor-grade neon is produced. The gas is then sent to Ukraine, where it is purified. However, the current war is likely to have serious ramifications on business links between the two countries. In 2014, when Russia annexed Crimea, the price of neon increased by up to 600% as a result of the trouble.

While Russia is not the only large-scale steel manufacturer that produces neon, extraction of the element cannot be set up anywhere at will. Neon capture requires specialised infrastructure, and steel plants must be shut down for the technology to be retrofitted.

If it is true that many companies have stockpiles of neon, there is no immediate risk of supply chain disruption. However, the longer the war continues, the more serious the problem will become. The crisis is, once again, reminding the world how manufacturers’ overreliance on a particular area can be dangerous. To make matters worse, the second-largest producer of neon is China, which compounds the problem due to recent U.S. sanctions on the Chinese semiconductor chip-making industry.

The situation is most likely to affect smaller manufacturers first; and there is a serious possibility that, in the mid-term, the war has the potential to create further disruption for the strained global supply chain.

Russia supplies approximately 37% of the world’s palladium. The metal is used in catalytic converters by the automotive industry, in sensor chips, and in certain types of computing memory. On the day the war began, the price of palladium increased by 7%.

Russia also controls about 10% of global copper reserves, used widely in electronics manufacturing. It is also a major producer of platinum and nickel, which is used extensively in electric vehicle batteries.

If the war continues for a prolonged period, there will most likely be delays in shipping, and prices will probably increase. Manufacturers will also look to suppliers of metals used in electronics manufacturing from other countries, palladium from South Africa, for example. However, despite the impending woes, because of the pandemic, manufacturers have taken a more preventative approach by stockpiling raw materials and diversifying their supply.

Germany, at the heart of Europe’s manufacturing industry, currently obtains more than half of its gas from Russia’s Gazprom—and demand is increasing as the country is phasing out electricity from nuclear and coal. The manufacturing sector in Germany, the world’s fourth-largest economy, contributes to roughly a quarter of its GDP—much more than other European countries. Top exports from Germany include vehicles, machinery, electronic products, and electrical equipment. It is safe to say that Germany relies heavily on Russian gas.

However, the day before the war in Ukraine began, Germany took the extreme measure of halting certification of the Nord Stream 2 natural gas pipeline. The pipeline planned to double the amount of gas sent from Russia to Europe. While the Russian retaliation for Germany’s decision is still unknown, anything involving restricting the flow of gas has the potential to hit manufacturing hard.

Although there are not likely to be any short-term effects, thanks to the end of winter drawing near, there is serious concern about next winter. Germany would have to give domestic heating priority, which means manufacturers might have to decrease output. The result would probably be an outpouring of manufacturing to other areas of the globe, which could—we’ve been here before—wreak havoc to supply chains. Despite Germany’s aspirations to power its manufacturing sector solely on renewable energies from 2045, it is a long way off from being able to achieve this.

Ocean shipping has already been affected

The previous three consequences of the war are more likely to have mid- to-long-term effects. However, the most immediate supply chain-related problem has been ocean shipping. The Port of Odessa (UAODS), an important Black Sea port, is currently closed due to the fighting, which means that vital shipping lanes are affected. Maersk, for example, the world’s second-largest container shipping line and vessel operator, has announced that no freight will travel to or from Ukraine until further notice.

The shipping titan, in an interview with Logistics Management, stated that land and air freight routes with Russia are currently operational; however, this could potentially change as the situation unfolds. Other supply chain management services, including UPS, FedEx, and TNT have also suspended services to either Ukraine or Russia. The war in Ukraine has already affected the flow of goods and trade, and the situation is being compounded by the economic sanctions, which have led to market volatility and production capacity being affected along certain logistics routes.

On a human level, the best option the world can hope for is a ceasefire. This, however, is unlikely to help supply chains. Industries such as high-tech electronics and semiconductors, and rare earth minerals are highly susceptible to unpredictability. The most probable outcome of the war, if it is resolved promptly, is that there will be some supply chain upheaval later on this year.

In a worst-case scenario, if the war is prolonged, supply chains will come under serious pressure in the following six areas:

Supply chain operators have learnt a lot over the past two years; they have become adept at handling crises and more resilient. Now they must forecast different scenarios and assess potential weaknesses in their system to start working on contingencies.